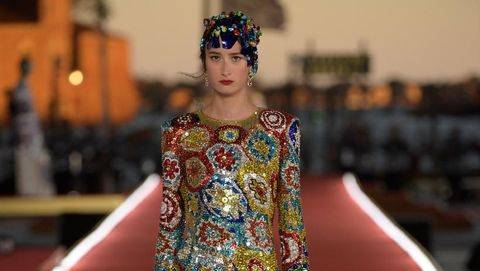 Dolce & Gabbana holds a fashion show for the 2021 Alta Moda collection in Venice, Italy. Reporting from Vogue, there were at least about 400 invited guests from the media and clients, who attended the presentation of the exclusive line. Including a number of famous celebrities such as Jennifer Lopez, Doja Cat, Kourtney Kardashian, Ciara to actor Christian Bale. The Alta Moda collection itself is an exclusive line similar to haute couture in Paris. So it is sold on a limited basis where clients can customize the look they want. Meanwhile, for celebrities, it can be a place to hunt for clothes for red carpet purposes.

Held outdoors, the show opened with Jennifer Hudson singing Nessun Dorma from the opera Turandot. The model also came, escorted using a gondola and walked on a stage that was covered with a red carpet. In terms of design, classic and glamorous styles are still the reference for this designer duo Stefano Gabbana and Domenico Dolce. Shown first is a fluffy dress decorated with a motif with a picture of the graceful Venice landscape. Another inspiration from this city is also expressed in the form of a luxurious embellishment on a long-sleeved dress with a distinctive pattern of Murano glass.

This collection also further reflects the ambition of this label to focus on targeting young consumers. Where comes the look like a top with statement sleeves. As well as a choice of models from celebrity children such as Leni (daughter of Heidi Klum), Emmeline (daughter of Christian Bale) and Jessie James and D'Lila Star (daughter of Sean Combs).

Trying to Rise After Controversy

Dolce & Gabbana's spectacular display cannot be separated from criticism, where the public still hasn't forgotten the controversial action this label has done. From Stefano Gabbana's insults to Selena Gomez by calling her 'ugly', Stefano's reluctance to have their label supervised by a Japanese designer, to the most criticism when he released a promotional video showing a Chinese model trying to learn to eat spaghetti using chopsticks.